The banks of the river Ganga in Varanasi might still survive the onslaught of “development”! 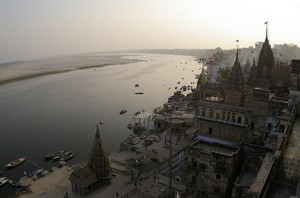 In a landmark judgement on 27 July 2012, Justice Ashok Bhushan of the Allahabad High Court, categorically ordered the Varanasi Development Authority and the district administration of Varanasi to “ensure that no construction is made 200 metres area from the highest flood level at both the banks of river Ganga” and that “appropriate notice and boards are placed at the banks of the river Ganga in this regard for the notice of public in general.”

The Allahabad High Court passed this order in response to the Public Interest Litigation, first filed by the Kautilya Society in 2005, appealing that the Varanasi Development Authority and the Uttar Pradesh State Government prohibit all illegal constructions on the banks of the river Ganga in Varanasi and implement laws and government orders to protect the Ganga riverfront ghats in Varanasi.

As part of its continuing efforts to protect the cultural, natural and architectural heritage of the city of Varanasi, especially the Ganga riverfront ghats, the Kautilya Society had appeared in the  Allahabad High Court on 27 July 2012 to defend the Public Interest Litigation it filed.