A Sea of Humanity at the Maha Kumbha 2013

The Kumbha Mela has its origins in Hindu mythology, in one of the most popular medieval texts, the Bhagavata Purana. Kumbha literally means “the urn/pitcher”. The first written evidence of the Kumbha Mela can be found in the accounts of Chinese traveler, Huan Tsang or Xuanzang (602 – 664 A.D.) who visited India in 629 -645 CE.

The story goes that the demigods lost their strength due to the curse of a sage, Durväsä Muni. Lord Vishnu instructed the demigods to churn the ocean of milk for the elixir/ nectar of immortality. To do this, the demi-gods had to make an agreement with their arch enemies, the demons or Asuras, to to churn out the nectar together and then share it equally thereafter. However, when the Kumbha containing the nectar appeared from the ocean, a fight ensued. For twelve days and twelve nights (equivalent to twelve human years) the gods and demons fought in the sky for the pot of nectar. It is believed that during the battle, Lord Vishnu flew away with the Kumbha containing the nectar of immortality, spilling drops at Allahabad, Haridwar, Ujjain and Nashik, the four places where the Kumbh festival has been held for centuries. In each of these cities, the “Ardha Kumbha” (or half kumbha) is held every six years and the “Purna Kumbha” is held every 12 years. 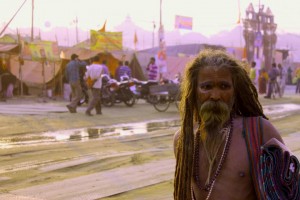 The Kumbha at Allahabad (Prayag) has a special significance because it is held on the confluence of three rivers, the holy Ganga, Yamuna and the mythical Saraswati, where bathing is considered especially auspicious for purifying oneself from sins.

Celebrated after 12 years, (the last one having been held in 2001), the 2013 pilgrimage gathering is a Maha Kumbh Mela (Festival) that only happens after 12 purna kumbhs, i.e once every 144 years, and always at Allahabad. 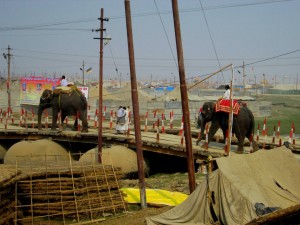 "We couldn't miss the fun", says the elephant.

The festival is considered to be the biggest religious gathering in the world. During the Maha Kumbha in 2001, more than 40 million people gathered on the main bathing day at Allahabad, breaking a world record for the biggest human gathering.